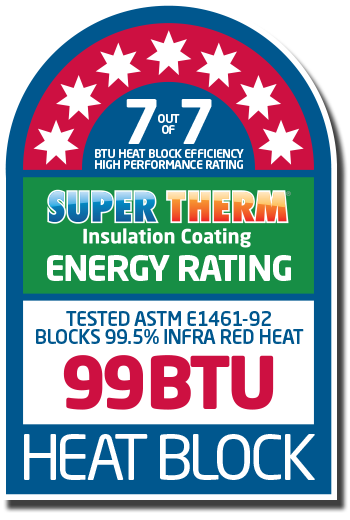 A BTU, short for British Thermal Unit, is a standardised measurement of energy. Technically, 1 BTU is roughly equal to the amount of energy required to raise 1 pound of water 1°F. A BTU is the basic measurement used for rating how much energy it takes to produce heat. It’s used in determining the efficiency of air conditioning equipment, furnaces, and any appliances that heat – such as water heaters, ovens, and fireplaces.

Combined with the BTU of 99.7% Super Therm blocks 95% of the heat load/solar heat (blocks the absorption and transfer of heat).

NOTE: Super Therm® is not a pure white colour, however the extra ceramic compounds proven over 30 years blocks 99.7% of infra red heat unlike other reflective paints making it a true insulation coating and more effective.

Emissivity is defined as the ratio of the energy radiated from a material’s surface to that radiated from a blackbody (a perfect emitter) at the same temperature and wavelength and under the same viewing conditions. All objects at temperatures above absolute zero emit thermal radiation. It is a dimensionless number between 0 (for a perfect reflector) and 1 (for a perfect emitter). Knowledge of surface emissivity is important both for accurate non-contact temperature measurement and for heat transfer calculations.

Solar reflectance (sometimes called albedo – Latin: albedo, meaning “whiteness”) is the ratio of solar energy that falls on a surface to the amount reflected. It is measured with a solar spectrum reflectometer on a scale of 0 (not reflective) to 1: (100 percent reflective).

Kilowatt hour is a unit of energy. If the energy is being transmitted or used at a constant rate (power) over a period of time, the total energy in kilowatt hours is equal to the power in kilowatts multiplied by the time in hours.

The K value of insulation represents the material’s thermal conductivity or ability to conduct heat. Usually, insulation materials have a K value of less than one. The lower the K value, the better the insulation. The textbook definition of the K value is “The time rate of steady heat flow through a unit area of homogeneous material induced by a unit temperature gradient in a direction perpendicular to that unit area”. Simplified, the K value is the measure of heat that passes through one square foot of material that is one inch thick in an hour. Super Therm® is rated 0.31 (ASTM 1269/1461-92), Fibreglass insulation is rated 0.53 (source).

Volatile organic compounds (VOCs) are organic chemicals that have a high vapor pressure at ordinary room temperature. VOCs contribute negatively to air pollution by participating in the chemical reactions that take place in the atmosphere and produce a variety of air pollution effects including the effect known as “smog”. CSIRO Australia states levels for VOCs are (descriptors have been adopted by APAS):

“It’s hard to stay warm in a wet coat”. Testing in Germany showed that Super Therm® coatings removed moisture to regulate those moisture levels in a wall during the first season of use. Their study showed that reducing the moisture (convection level) in a wall makes that wall more energy efficient and just having that dry wall can improve performance of the wall an average of 15%.

Conduction occurs when two object at different temperatures are in contact with each other. Heat flows from the warmer to the cooler object until they are both at the same temperature. Conduction is the movement of heat through a substance by the collision of molecules.

Super Therm® is not design as a conductive insulation